One Million dares everything and changes the codes with humor …

Paco Rabanne has never hesitated to use his whimsical creativity to surprise or strike with his brilliant innovations. Ultraviolet, XS or even Black Xs are all daring and completely new fragrance manifestos. No wonder then that the great Paco Rabanne did not hesitate to offer One Million and “his juice full of humor” to these gentlemen, as to his ladies with Lady Million .

One Million pour Homme will be composed by one of the star trios of perfumery: Christophe Raynaud, Michel Girard, Olivier Pescheux, just that! And above all, it will be created to stand out in the still classic universe of men’s perfume. Because One Million does not want to look like the others , it is there to break the codes, break the habits and especially to be noticed! So the classic ferns are replaced by rose absolutes and spiced by searing cinnamon, nothing will be the same for the One Million man.

What is more, One Million’s advertising campaign will be as flashy as its scented composition, even if it means shocking by a sense of extreme derision. Because the One Million man has everything to “displease”! Golden boy, he gets whatever he wants with the snap of a finger, cars, women, nothing can resist him! However, these advertisements, not devoid of humor, will make an impression by creating a universe of bling-bling so surreal that no one can escape it. One of the creators of the campaign recounts: “With this sexy, ill-bred brat who wanted women, big cars and money, we gave the muse a little human flaws, we spoke differently to the men who , in the end, identified themselves ”.

In 2017, we had the pleasure of discovering a new One Million campaign with two new ambassadors still as sassy: Sophia Ahrens and Jordan Barrett. The rhythms are linked very quickly, the music is clearly directed towards generation 2.0, and the heroes always use their power to obtain, with the very famous snap of the fingers, all that their status of millionaire imposes.

It should be noted, however, that although this advertisement is largely intended for a younger audience than the other campaigns, gold and excess remain the absolute masters of the images. One Million will ride the wave of success for a long time to come, that’s for sure!

A coppery masculine scent that doesn’t take itself seriously, One Million of course!

The One Million bottle is a reflection of its entire history: excessive, flashy, massive! Indeed the stylized gold bar for One Million could hardly go unnoticed, and he does not want it! Its logo in the Far West writing font and its metallic universe will honor the style of the great couturier Paco Rabanne, follower of these creative fantasies.

As for the composition of One Million, it is also explosive! The top notes are sparkling, fruity and light around notes of mandarin, grapefruit, lavender and mint. But the rose absolute brings, from the start, its unprecedented flowery sweetness for a virile masculine. At the heart, white wood will meet the burning cinnamon which will take on a fruity touch of apple to surprise us once again. Finally, the obvious sensuality of the One Million man will be highlighted by patchouli from Indonesia mixed with a mysterious amber. A very masculine leather note will bring its originality.

Exclusively the One Million Box by Paco Rabanne, for the end of the year celebrations. 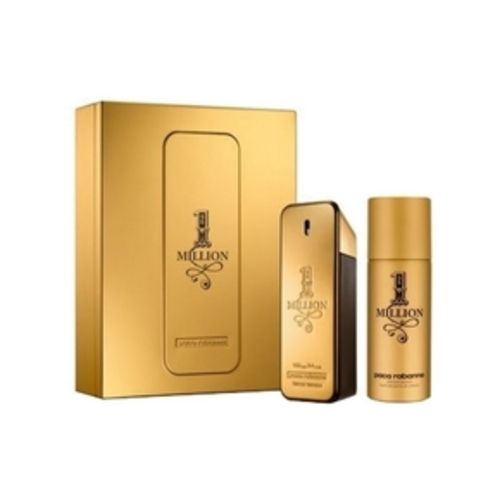 Buy the 1 Million Christmas 2013 Gift Box from Paco Rabanne at a low price on Fragrenza Perfumes.

This racy elixir presents particularly daring coppery notes. Its scent begins with a series of luminous and sparkling notes.

The freshness of grapefruit, mint and blood tangerine invites you to be charmed.

Its bottle in the shape of a gold ingot remains very close to the metallic universe of Paco Rabanne ready-to-wear and symbolizes “dreams and fantasies” while its logo, whose features are inspired by the Far West, stick to the image of the man who wears it: a man who dares and who seduces, a man who succeeds in everything …

Tauer Perfumes
Most popular this month

Dolce & Gabbana – The One Essence

The new B. Balenciaga is more intense than ever!